KALAMAZOO — Split largely down party lines, Kalamazoo County commissioners had mixed feelings on the proposal to put a tax question on the November ballot to provide more housing opportunities for the homeless.

The board discussed the plan brought by the Kalamazoo County Public Housing Commission for the first time at Tuesday's meeting, which was attended by nearly two dozen advocates from local churches, nonprofits and activist groups.

The proposed 0.33 mill would generate $2.7 million a year over six years for the Local Housing Assistance Fund, which the county created in late 2006 but has been running out of money. It would cost $16.50 a year for a homeowner of a $100,000 market-value house.

The tax would pay for permanent housing for the homeless, rent subsidies for those struggling financially and would offer one-time payments to people on the verge of losing their homes. It would also pay for four employees to administer the fund and several housing specialists to work one-on-one with the homeless to help them become more independent.

Several Democrats said they supported asking voters to fund the plan because not only was it the moral thing to do, but it could also save county money in the long run, such as if fewer homeless people were arrested and sent to jail.

"I look at the cost savings," said Commissioner John Taylor, who lives in Kalamazoo. "I see value added to the community. I support it 100 percent."

But several Republican commissioners, who control the board's majority, said they had concerns about raising property taxes, especially in a bad economic climate.

Board member Phil Stinchcomb said he supported helping the poor, but he didn't want to raise taxes for homeowners, who said they are overtaxed already.

"We're going to be asking people to pay more money," the Portage commissioner said. "For me, that's where I'm going to have a problem."

Commissioners did not take action Tuesday, but Chairwoman Deb Buchholtz said commissioners could resume their discussion in one month. The board's deadline is Aug. 30 to put the issue on the Nov. 8 ballot.

Housing Chairman David Anderson, who pitched the plan to commissioners, said he even had concerns about a new tax request.

"I have been conflicted about this," said Anderson, who is also a Kalamazoo city commissioner. "I do always have a concern going to our community and asking people to pay more taxes."

But Anderson said the commission is unable to find new state or federal dollars to provide steady funding for the fund.

"The need is great," Anderson said. "This is something worth asking for." 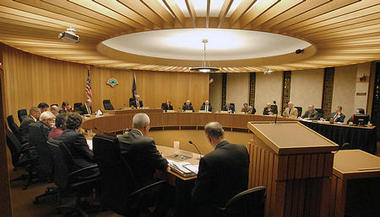